Diary of a Cavernoma Brain Surgery by John Conway 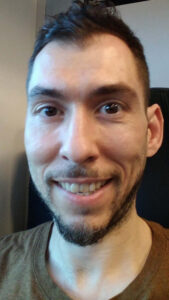 I got up and let the cats out. Noticed strange pins and needles in my fingers and both hands. I thought I was just cold so I got down and did some push ups in the kitchen while I waited for the kettle to boil and then carried on with my day.

I still couldn’t shake off the pins and needles in my hands so I tried to keep warm but the tingling still didn’t go.

My mother’s 74th birthday. I was planning to visit but decided not to so called to send my best wishes and let her know. I still had this buzzing sensation in my hands. During the morning and early afternoon the buzzing progressed further up my right arm to my shoulder and by 3pm my right side of my chest. I remember not feeling too great by this point, I took a cup of coffee up stairs with me and had a short lie down. I remember at one point grabbing my coffee mug not by the handle but instead with my thumb on the outside of the handle and fingers on the other side of the cup. My condition proceeded to worsen and I started to vomit. My temperature was also fluctuating hot one minute and cold sweats the next. I texted my partner to come home as soon as possible but she was only an hour or so from finishing. I was thinking about any strange foods I may have eaten in the previous 24 hrs but nothing came to mind.

I proceeded to be sick more frequently every ten to twenty minutes or so and I started to feel like I had the worst hangover I’d ever experienced.

My partner Leni shortly arrived home and I got her to call 111. She managed to get through but to be honest we should have called 999 as I was then put on a watch list and no ambulance came for me. We still didn’t know what was going on with me as all the questions surrounding having a stroke I passed with flying colours. I could hear ambulances on the main road but any sirens were not for me. Leni proceeded to call 111 a few more times and they wanted to speak to me but I had to pass the phone back as I was being violently sick. By this time I was climbing the walls. The ambulance turned up at 2am. The paramedics took me to The Royal London Hospital in Whitechapel. I think they thought I had taken drugs and as they led me through to check in, the paramedic had to correct my direction of my walking as I started to veer off to the right headed for a collision with the wall. After another 45-minute wait in A&E they gave me anti sickness and fluids intravenously and took blood samples. I then quickly started to feel so much better. Sickness is the worst!

I was given a CT scan but before my scan the specialist said he very much doubted that there was anything wrong with my brain. After the CT scan the specialist said he was very sorry and that he had to eat his words, he said they noticed a lump in the bottom back part of my brain located on the medulla. Strangely, I didn’t feel too worried. I think I was just happy to not feel sick anymore. They then transferred me upstairs onto a stroke ward.

I was about to sleep when they turned on all the lights at 7am. I felt really tired by this point.

Over the next two days in hospital different specialists came to talk with me and checked me over. One said that I had lost no strength in my right side which is why I was the only one able to walk around on the ward, everyone else had sadly suffered a typical stroke and were unable to move out from their bed. I noted my right foot was turned out and my ankle made a strange clicking noise as I walked.

I couldn’t write or sign my name particularly well and I couldn’t hold a spoon or fork. I had to relearn to use these things I’d taken for granted so easily before.

After two-and-a-half days in hospital I was back at home.

In the morning my partner was due back to work. We were sitting in bed having a coffee and I started to get buzzing in my left hand again which had not been there previously, only when it first happened 2-weeks ago. After half an hour of it not going away we decided to call the ambulance. The paramedics arrived very quickly this time as my partner explained the situation in detail. I was wheeled out and taken to The Royal London Hospital once again.

A whole day was spent and more scans. A CT scan first then a more detailed MRI scan of which since I’ve had many. They then told me that I had a Cavernoma and that the buzzing in my left hand was due to blood products that were remaining from the first bleed. I was put on a course of Dexamethasone steroids for a few days to reduce the swelling in my brain and also my hand. I was seen by the neurosurgery team. They told us about the Cavernoma Alliance. Thankfully the sensation had diminished from my left hand by the time I was discharged in the early evening.

We checked out the Cavernoma Alliance website. My partner signed us up and we visited one of their meetups at Queen’s Neurological Hospital about 3 weeks later. They made us feel very welcome. But in my mind it felt like the club no one wanted to join, now I was a part of it like it or not.

I asked a question. A young man who had lost an eye due to his cavernoma, perked up and told me to just get on with my life and enjoy it and not think about the ‘what if’s’. Sometime’s things in life are out of our control, he said, this is part of life itself. His interjections helped me a lot.

A few weeks on I had a meeting with Mr Christopher Uff, one of the top neurosurgeons at The Royal London Hospital, he informed me of my condition and said they only operate if I experience a second bleed as surgery is a risky business. Mr Uff believed it was operable but also he gave me the option of Gamma Knife surgery if I eventually needed it.

My father had also passed away in August of 2019 sad at the fact of my condition.

Living in strange times my attention was drawn to the first news stories being reported about Covid-19 in late 2019.

We had just finished eating dinner and after half an hour of relaxing on the sofa I suddenly felt awfully sick very quickly and was. The intensity of the buzzing on my right side felt tenfold. I immediately knew I was having another bleed. Knowing the hospital happened to be full of Covid patients and being the evening I decided to stay at home. My plan: to call the doctor the next day and get proper anti sickness medication, stabilize myself and seek further guidance. So I waited another day before calling an ambulance. I stayed in a Neuro Ward for another 2 days with my observations being taken every half an hour. I was then sent home.

On my return I was not in good shape. I could see how this condition could slowly cripple me.

I had another appointment with Mr Uff. He gave me the two options of surgery. The Gamma Knife option which would thicken up the outside of the cavernoma to hopefully prevent further bleeds. Or invasive surgery to hopefully fully remove it. And he also told me about managing it without surgery, though he did not recommend this as he had a patient who chose to manage their Cavernoma this way and over the next 5 years suffered more bleeds, ended up in a wheelchair, had one last massive bleed and died.

I opted for surgery as removal was a possible option. The waiting was the worst part. And I couldn’t believe that I would ever have brain surgery in my life or that something like this could happen to me.

The day had come. Said my final goodbye to Leni at the entrance to the hospital as Covid-19 stopped others from entering.

Once getting onto the ward one of the specialists talked me through what was going to happen to me during the procedure, and the major risks that were involved with this particular surgery.

I was told that It was The Royal London Whitechapel’s 280th Birthday today and that I was Mr Uff’s only surgery patient that day.

The mind starts to dart about. Reassured they were going to look after me, they told me about a piece of technology they use that can tell if they are close to delicate parts in the brain that if tampered with may lead to deficits. This further eased my anxiety. Umm. Accepting my fate and glad to be getting all of this out the way, they wheeled me through to the operating theatre. Two ladies met me and a young man all busy preparing things around me. They further reassured me, attached some sensors to my chest, put a line in my arm and gave me the pre-med. They then gave me gas and air and I shortly fell asleep.

I was forewarned by Mr Uff it was going to be a particularly painful operation. He said he had to go between my neck muscles and shave a little bit off in order to gain access.

A three-and-a-half in incision was made from the bump on the back of my head where the neck muscles attach to the skull, to near the base of my neck. A small portion of the base of my skull was removed to further widen the space big enough to use a small circular saw to make a larger horseshoe shaped entrance that revealed my brain. The cavernoma was located within a fold of the brain which they gently pushed on, the cavernoma rose to the top and was cauterised and completely removed.

Mr Uff said it would be excruciating, he was correct. I was discharged from hospital 2 Days later. I was told to call my doctor if I needed something like codeine, I did.

They made me dream badly when I eventually managed to fall asleep, so I stopped taking them after about 4 days. The first 10 days after the operation I can only describe as pure darkness.

I was told by Mr Uff before the operation that it would not cure the buzzing sensations. They are there for life. But was to stop any more bleeds from occurring in the future eliminating any 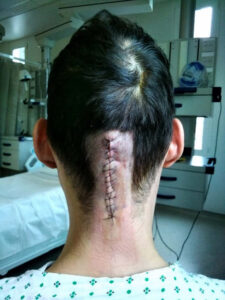 The operation was a success.

I’m lucky to live in a country with an NHS. We must all fight for this.

I cannot give enough thanks to my surgeon Mr Christopher Uff and his team, I owe him my life – or at least a pint!

The support and information Cavernoma Alliance offered me in my time of need, I am truly grateful for.

And my partner Leni who looked after me. And then some. I owe you.