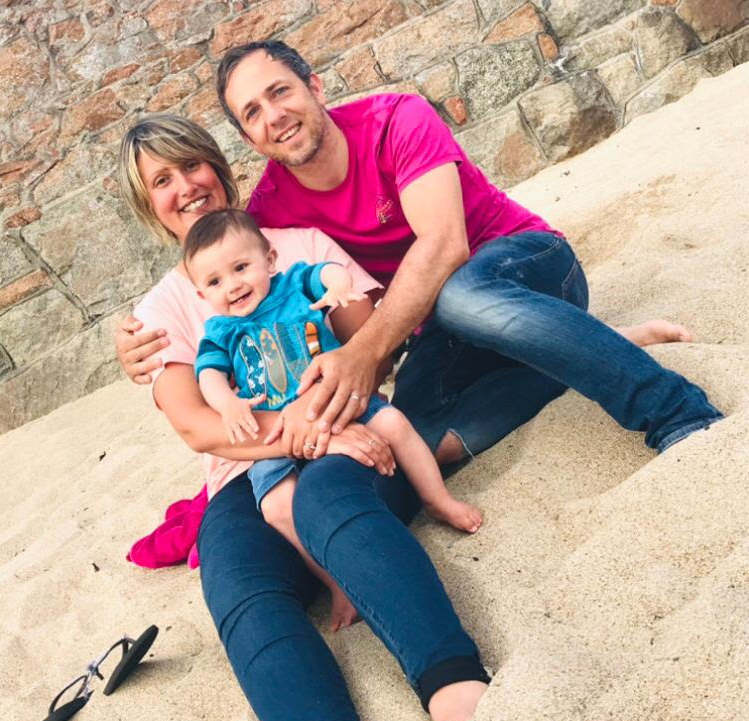 In May 2017 I was on holiday in Barbados with my wife, we had been on a boat trip for the day. In the evening we had a couple of drinks and I noticed my tongue was shaking and kept flickering, we had a laugh about it. I was suddenly woken about midnight with my left arm fiercely thrashing back and forth and I had no control over it, it then quickly turned into a seizure. Never had I experienced anything like this!

My wife had gone to reception to call an ambulance, once my seizure had stopped I followed her down when another seizure began. We had to wait 12 hours in the waiting room of the hospital before being seen. It was so scary not knowing why these were happening and wondering when the next would start again. My wife and I decided that maybe I was sun burnt and had heat stroke which had caused the seizures so we weren’t overly concerned to begin with.

I had another couple of seizures which felt more violent each time before being seen by the doctor. Eventually they took me for a scan. Then we heard the words ‘you have a lesion on your brain’. Never in a million years did we think this would be the outcome! We were in total shock. My original diagnosis was a meningioma brain tumour. When you hear the words ‘brain tumour’ panic sets in.

Coincidentally at the time I was diagnosed my brother was working for the Jersey brain tumour charity in Jersey Channel Islands (I know you couldn’t write it!). We called him for advice and he was very reassuring. I was put on seizure medication. Luckily, we had travel Insurance, a doctor flew out from the UK to travel back with us to Jersey (the only time I have ever got to fly first class, always got to see the positives!). It was only when I got back to Jersey that I discovered it was actually a Cavernoma in my right temporal lobe effecting my left motor neurones, around the size of a 50p!

This new diagnosis was almost like being told the news all over again and I became quite anxious and worried never having heard of one before. This is where CAUK have really helped, offering support and being part of groups on social media. Reading others stories, symptoms, troubles has really helped me to understand and accept. In October 2017 I had a successful craniotomy at Queens hospital In London.

I must add here how fantastic the Jersey brain tumour charity have been throughout. They helped fund our flights from Jersey to the UK and my wife’s hotel. This really helped take the pressure off a little. We will be forever grateful to them. 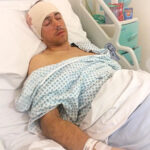 I remember going down for my surgery. I had met the surgeon (the amazing Mr Kitchen) prior and when I saw him all gowned up he could see how nervous I was and reached out, hugged and reassured me. I remember coming around and the first thing I asked for was a biscuit (food never far from my mind!). Then it hit me, my head was bandaged up and I had a catheter attached. When I caught a glimpse of myself in the mirror the enormity of the operation I had just undergone hit me. I couldn’t hold a knife and fork, I was struggling to walk and talk and I could tell by the look in my wife’s eyes that she seemed scared.

Within just three days I walked out of hospital feeling very unsteady and dizzy and thought wow it’s over, let the recovery begin. I felt very lucky and relieved that they were able to remove the Cavernoma but felt uneasy that there was a piece of metal inside my head holding my skull together! We went to Brighton to stay with my Uncle as I wasn’t allowed to fly until the air in my head had cleared (my wife seems to think it never went and air is the only thing up there now!). 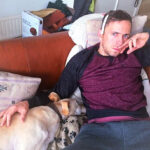 I had developed severe anxiety that would paralyse me and lived in constant fear that I was going to have another seizure but guess what, nearly four years later that seizure never happened. We brought a puppy whilst I had my year out recovering and she really helped to ease the anxiety. The recovery was slow, but slow and steady always wins the race! There would be good and bad days.
My head was affected by low pressure and I would suffer severe migraines, my memory is quite bad (at least now I have an excuse when my wife moans I haven’t done something!). My lifelong passion of playing football was over which effected my mental health. I had to stop working as I was unable to drive. I suffer with severe muscle twitches in my legs.

However, I am back! I am back at work, I walk for miles with my dog, ‘Pamps’ is back at football. We raised over £5000 playing in a charity football match to show our thanks and gratitude to the Jersey Brain Tumour Charity. I have a one-year old son who really has been the light at the end of the tunnel. Above all I can still use the excuse when I ‘forget’ to put the washing out or ‘forget to start the dinner’. 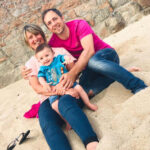 It was a journey but it has brought me closer to my family and made me realise what really is important in life. What really helped during my recovery was the walks, fresh air, talking to people, going to events held by the Jersey Brain Tumour Charity with others in similar situations, having someone to ask ‘is this normal’, ‘should this be happening’, getting worries clarified, even asking the doctor, don’t let your mind run away! I do worry sometimes do I have more, will it grow back, what if this, what if that, could my son have one but for now I’m living in the moment and feel like the luckiest guy in the world!