An Introduction to Cavernoma Genetics (Part 1) 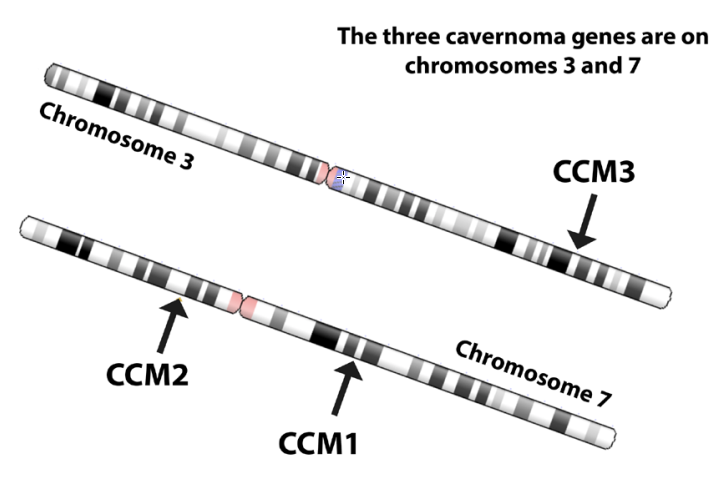 Cavernoma form in the blood capillaries in the brain or spinal cord. There are three known cavernoma genes, and about a quarter of people with cavernoma have inherited one of these genes from one of their parents – these are known as familial cavernoma. What do these genes do? It turns out that these same genes are crucial in the formation of sporadic cavernoma – the cavernoma that form in the three quarters of those with cavernoma who did not inherit any of those genes.

This part starts by describing the critical difference between a normal blood capillary and one with a cavernoma. It then gives a background to genes and genetics, and explains what the cavernoma genes do (or don’t do) [hint: it involves proteins] and why these genes are critical in the same way for people with familial and non-familial (sporadic) cavernoma.

All forms of cavernoma involve a genetic mutation. Here are some notes on cavernoma genetics to understand cavernoma formation. 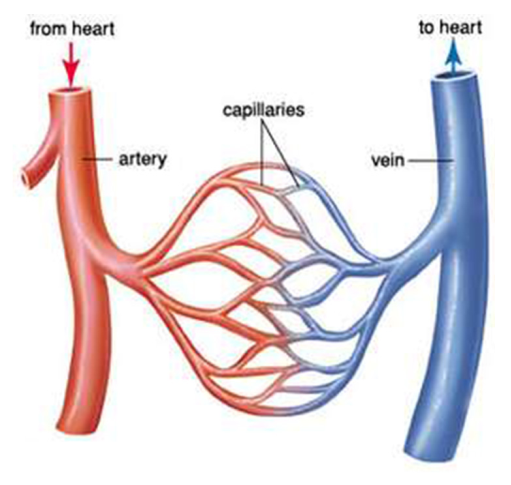 Cavernoma are swellings of the blood capillaries, shown schematically in the diagram on the right. 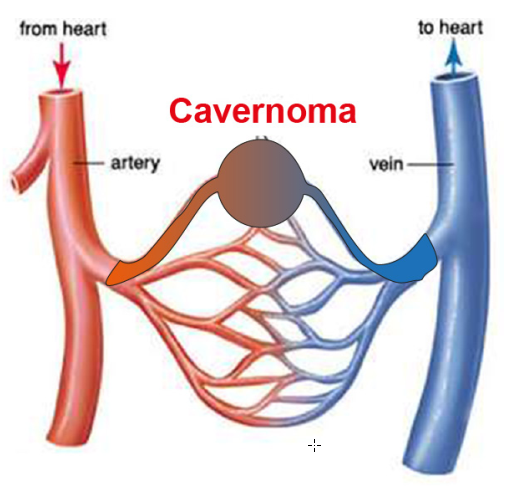 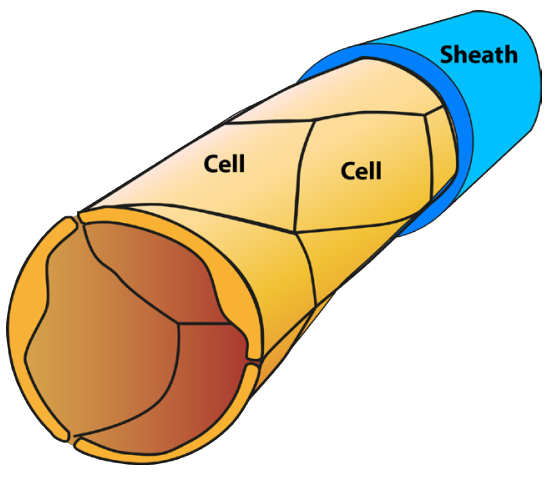 Blood capillaries are small thin tubes, not much bigger in diameter than a single red blood cell. Their cell wall is a network of cells, surrounded by a sheath to give strength but which is permeable to oxygen and nutrients and even blood cells. 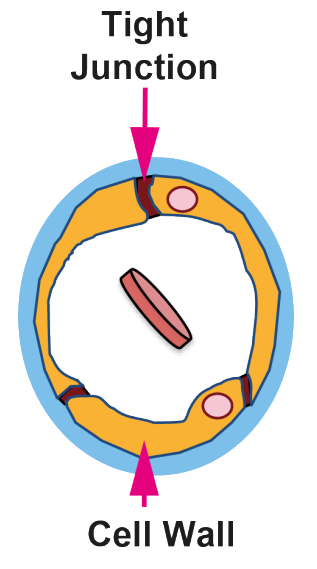 In a normal brain blood capillary, the cell walls of adjacent cells are held tightly together by “tight
junctions”.

In a cavernoma, the tight junctions are lost, and the capillary becomes leak 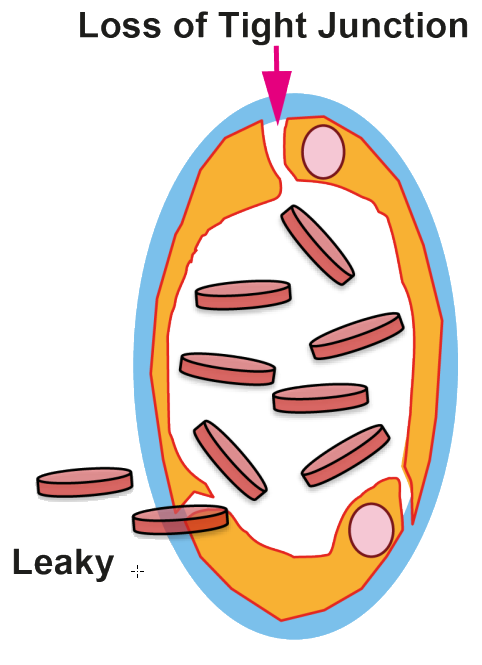 What causes the capillary cells to lose their tight junctions?

The question we should ask, is “How does the cell make tight junctions?” because if this is disrupted, the tight junctions are lost. We need to start by understanding the role of the cavernoma genes. 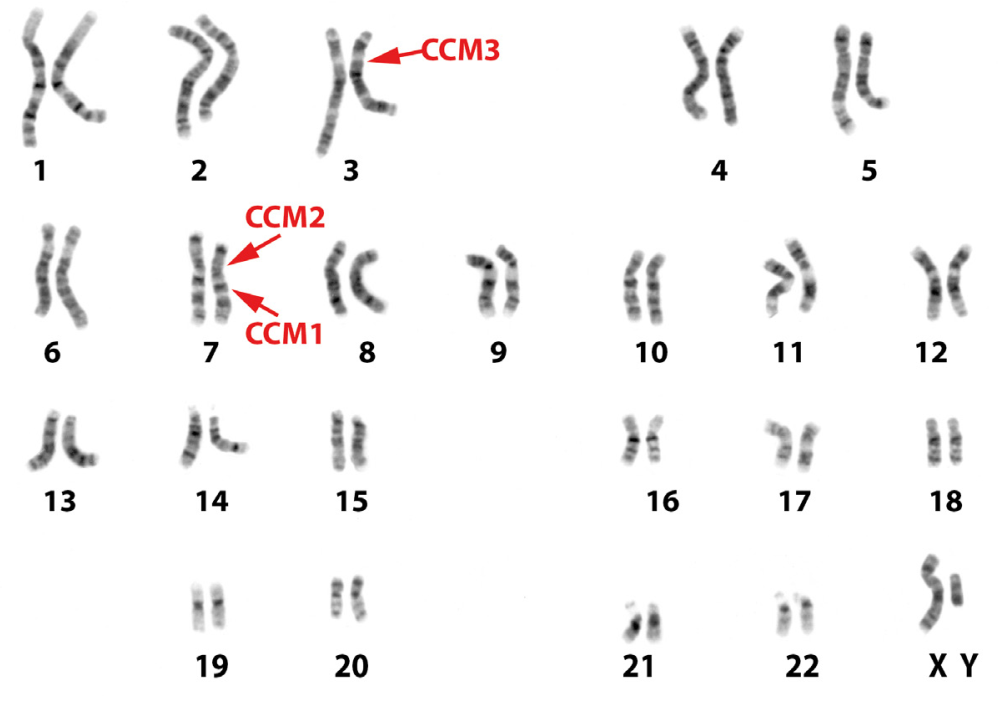 Humans have 23 pairs of chromosomes, one of each pair from their mother and one from their father. Almost all cells in the body have these chromosomes, and they
contain the instructions/code for making the body what it is: its structure, functioning and growth.

The instructions are in genes, and each chromosome contains a number of genes, each one responsible for an aspect of the body.

Humans have about 25,000 genes, so on average each chromosome has about 1,000. Long ones have more than short ones. The genes are in sequence along the length of the chromosome.

What do Genes do?

A gene is the instruction for a cell to make a protein. Each gene makes a distinct protein with its own function. 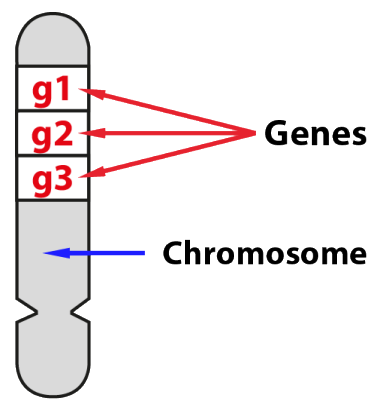 We know of three ‘cavernoma’ genes, named CCM1, CCM2 and CCM3, with locations shown in the top diagram, one on chromosome 3 and two on chromosome 7.

In over 99.9% of the population, the three ‘cavernoma’ genes have the code for proteins named ccm1, ccm2 and ccm3. 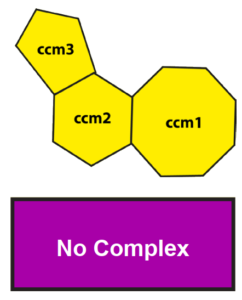 together to form a complex. This complex is a critical link in the pathway in the formation of tight junctions. In this 99.9% of the population the codes are what we will call the Tight Junction forms (TJ) of the ‘cavernoma’ genes. [See Box 1]

In less than 0.1% of the population, the code of one or other of the three ‘cavernoma’ genes is a mutant and results in either no protein or in a protein that cannot produce the complex needed for the formation of a tight junction. It does not matter which of CCM1, CCM2 or CCM3 is abnormal, the consequence is the same. We will call these the Cavernoma forms (CCM) of the genes. The differences in the codes between the TJ and the CCM forms can be extremely subtle. It takes very little change in the code of a gene for a dramatic effect on the protein, and so on the body. These different forms of a gene are known as alleles.

Since each cell has pairs of chromosomes, any individual has two copies of each gene – one from the mother and one from the father.

In the case of cavernoma:

Over 99.9% of the population has the TJ forms of the three  ‘cavernoma’ genes, and children of these parents will be born with both copies the TJ form. 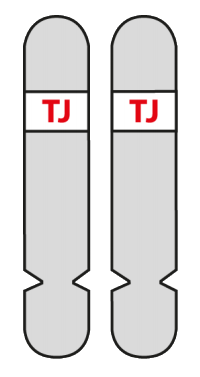 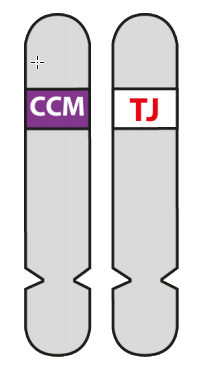 In the VERY rare event that both mother and father have the same CCM gene, any foetus that  inherited the CCM form of the gene from both parents would be aborted early in pregnancy.

How?
This is caused by a SOMATIC MUTATION and is the subject of the next blog. 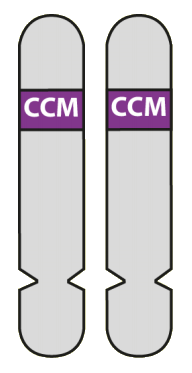 Any gene can exist in different variants in a population. This will happen because it mutates.

In the scientific literature it is normal to refer to the  ‘Cavernoma gene’ for the ‘normal’ gene and any mutant as a ‘mutant Cavernoma gene’.