This blog describes what happens to enable cavernoma formation in people with both familial and sporadic cavernoma. The answer involves direct mutation of genes in the blood capillary cells – what are known as ‘somatic’ mutations and the two-hit mechanism. This explains why people with familial cavernoma almost always have multiple cavernoma and why everyone else tends to have just one.

If you missed Part 1 of this series, you can see it here.

Why people - including children - with familial cavernoma tend to have multiple lesions, but those with sporadic cavernoma have just one.

All the cells in your body except for those in the sperm or the egg are known as somatic cells. The genes in these cells can mutate. This can be caused by a number of factors, for example radiation (present in the environment at low levels, or from x-ray scans), toxic chemicals, errors in cell division. For any specific gene in a specific cell, this is a rare event, although taking the body as a whole a somatic mutation somewhere is quite common.

This somatic mutation is commonly called a “HIT”. 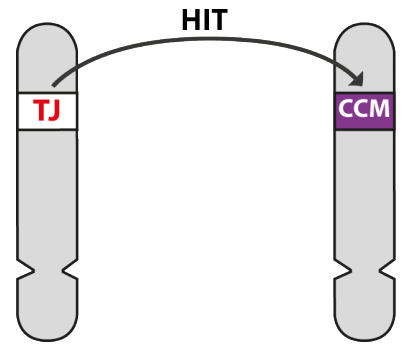 We saw in the first part of this series, Box 1D, that TJ genes result in a complex of proteins that are a critical part of a pathway to produce a TIGHT JUNCTION between capillary cells, and thus a normal capillary.

A person with familial cavernoma has one TJ gene. This will produce enough of the proteins required to form the protein complex, and thus a tight junction and a normal capillary.

Thus, somatic mutations must occur for a cavernoma to form.

In a person born with one CCM and one TJ gene, a single somatic mutation (HIT) in the TJ gene of a capillary cell wall cell results in both genes being CCM and a cavernoma can form.

This is known as a FAMILIAL cavernoma. 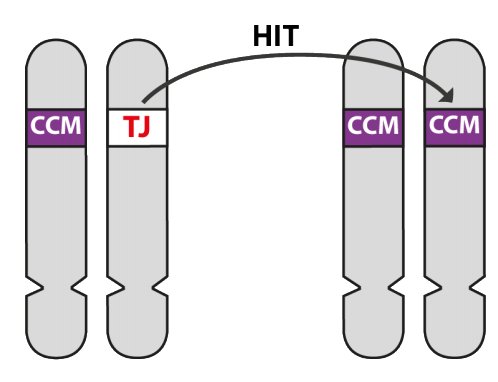 In a person borne with two TJ genes, two HITs are required to cause both genes to be CCM for a cavernoma to form.

This is known as the two-hit mechanism, and the result is a SPORADIC cavernoma.

Why are Familial Cavernoma more common in Children?

Why do people with Familial Cavernoma tend to have multiple Cavernoma, but those with Sporadic Cavernoma normally have just one?

To obtain two hits on the same cavernoma gene on the two chromosomes in a specific cell is a MUCH rarer event still.